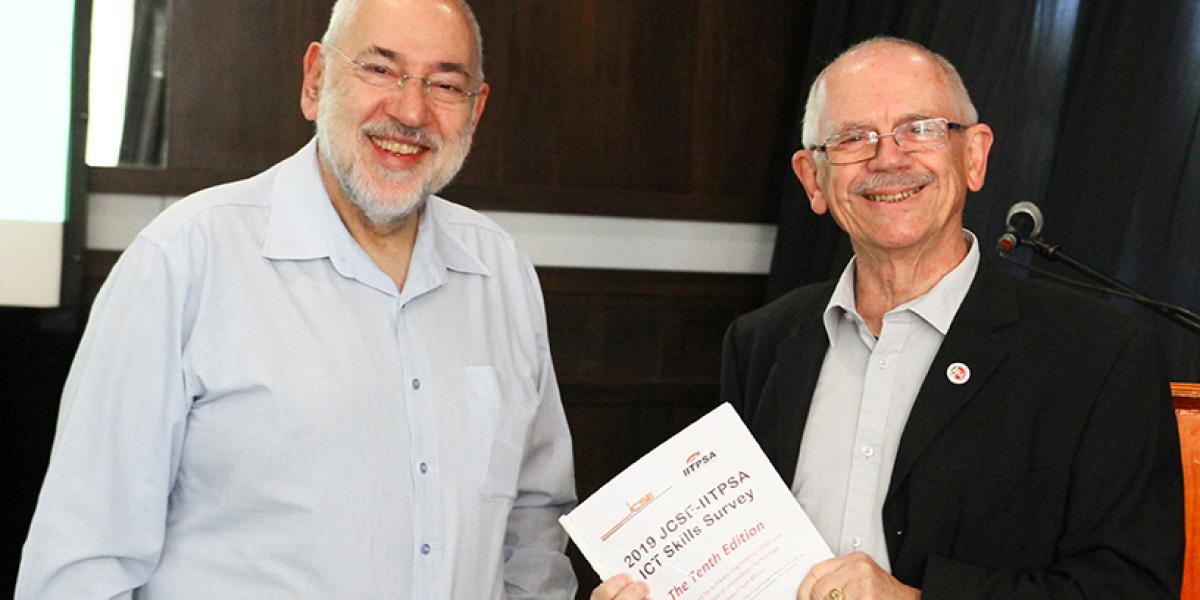 Professor Barry Dwolatzky (left), director of the JCSE at Wits University, and Adrian Schofield, production consultant at IITPSA and consultant at the JCSE Applied Research Unit.

Despite the hype around the fourth industrial revolution (4IR) in SA, there remains a chronic shortage of all types of ICT skills required to help local organisations succeed in the digital economy.

This is the highlight of the 10 edition of the South African ICT Skills Survey, carried out by the Joburg Centre for Software Engineering (JCSE) at Wits University, in partnership with the Institute of Information TechnologyProfessionals South Africa (IITPSA).

The research found the 4IR has not yet had a significant impact on the South African ICT skills landscape, with core digital skills evolving a lot slower than the technology buzzwords often used, despite efforts by government and the private sector to build a skills pipeline.

According to the report, skills associated with the current set of emerging technologies, such as artificial intelligence, Internet of things, blockchain, automation, data science and programming were found to be the scarcest.

While less than half of enterprises polled said the ICT skills shortfall is having a major effect on their business, virtually all respondents said they felt a responsibility to help their employees reskill to meet the new era of digitalisation.

Adrian Schofield, production consultant at IITPSA and consultant at the JCSE Applied Research Unit, notes almost all practitioners surveyed felt a need for more upskilling to meet the needs of the new era of digitalisation. Despite this finding, ICT skills demand and supply has not changed from a year ago.

“Although many stakeholder groups are making concerted efforts to improve the competency and employability of young people through some excellent initiatives, the results tend to be counted in terms of hundreds or maybe thousands of candidates, when what is really needed is opportunities for hundreds of thousands or millions of skilled people.

“However, these numbers can only be achieved in a stable, investor-friendly environment. The continued fragmentation of stakeholder groups in the ICT sector inhibits the ability to take a holistic approach to analysing the data available from the myriad role-players,” says Schofield.

SA, according to the research, has an estimated half a million ICT employees, with 50% employed within the ICT sector and the other 50% employed elsewhere.

In addition, SA continues to lose highly-skilled ICT professionals to international organisations. The percentage of respondent employers recruiting overseas in 2019 has risen to 37%, and with an influx of foreign ICT skills at the same time, this makes it hard to determine exactly how many skills the country actually has, and what the shortfall is in the various sectors, according to the report.

In the last year, we have seen government focus on the 4IR as the potential catalyst for improvements in productivity and the driver of innovation and enterprise development.

However, the survey analysis endeavours to separate the evolutionary components of this “revolution” from the cutting-edge, quantum leaps arising from digitisation at scale, in the context of the requisite skills pool.

“Among the contributing factors that should long ago have been addressed is the delayed rollout of broadband access across the country. The failure to achieve the objectives of SA Connect is denying millions of South Africans access to broadband services and severely restricting the government’s capacity for service delivery through offices that are unconnected,” notes the report.

Although we are beginning to see more emphasis on the newer competencies, the skills in demand have not changed significantly since 2018, but disruption in traditional markets could drive rapid change in future, notes the report.

The survey found the top 10 skills most needed now and over the next year, in order of importance, are:

The South African economy is in dire straits, according to the report’s authors. Over the last two years, it has dipped into technical recession, only to be “saved” by exceptional performance in one or two sectors.

However, the authors believe these “upticks” do not appear to be sustainable in an environment where government is overburdened with debts that it cannot afford to service, never mind repay, and there is no effective plan to reverse the increasing levels of unemployment.

“With around 55% young people aged 15–24 being unemployed, SA’s economy is in deep trouble. This means the skills gap becomes less important to our government, as other issues take priority. The crucial part is how we take the ability to give people skills and turn that into economic value for the country. Another question to ask is: if more people become skilled and more employable, will they really become employed? So the demand is there; the challenge is how much can we grow the use of technology in SA to build a viable economy.”

Professor Barry Dwolatzky, director of the JCSE at Wits University, pointed out during his presentation: “South Africans are being told that everything is changing and we need all new skills in the 4IR, but my belief is that the phrase 4IR is being used as a catch-all for a number of things – many of them encompassing the kind of evolutionary digital transformation we have seen over many decades. However, the 2019 ICT Skills Survey does indicate the hype around 4IR is driving people to start looking at upskilling.”

“Revolutionary change is that which drives a quantum leap, bringing a whole new digital model. This is something we are not really seeing in SA as yet, but there are signs that in years to come, digital disruptors could suddenly spark revolutionary change in traditional sectors, which will impact on skills and jobs.

“Our overall sense of what is happening in the ICT skills field from the employer perspective is that there is a slowing in the demand for skills but that the ongoing pressure from the introduction of new and innovative technologies continues to ensure the skills gap is not closing.”

“This is a unique property of South African ICT practitioners, which makes us very different from our counterparts in Europe and the US, and may partly have come about as a result of skills shortages.”

The survey again highlighted the poor state of education in SA and in particular the very low number of learners achieving competence in science, technology, engineering and mathematics subjects.

Schofield stresses the urgent and persistent need to raise the game in the education pipeline, adding it is incumbent on the private sector to drive the required changes through partnership with government and expansion of the many initiatives taking place.

“South Africa is not doing nearly enough to ready school-leavers to engage and fill important vacant roles within the country’s ICT sector. There are many initiatives attempting to address this issue but they tend to be in relatively small pockets and are not resolving the underlying lack of appropriate curriculum, relevant teaching materials and skilled teachers,” Schofield points out.

Whether school pupils go on to university, to the work environment or whether they go into vocational training, they must be ready to move into that environment.

“With most organisations making the digital shift, it is becoming more and more critical for youth to be work-ready and fill the roles which are dependent on technology to improve the overall success of the organisation. Without some serious government re-thinking on rebuilding the economy, it is not easy for the private sector to increase the number of jobs and other value-add economic opportunities,” he warns.