AIoT: When Artificial Intelligence Meets the Internet of Things. 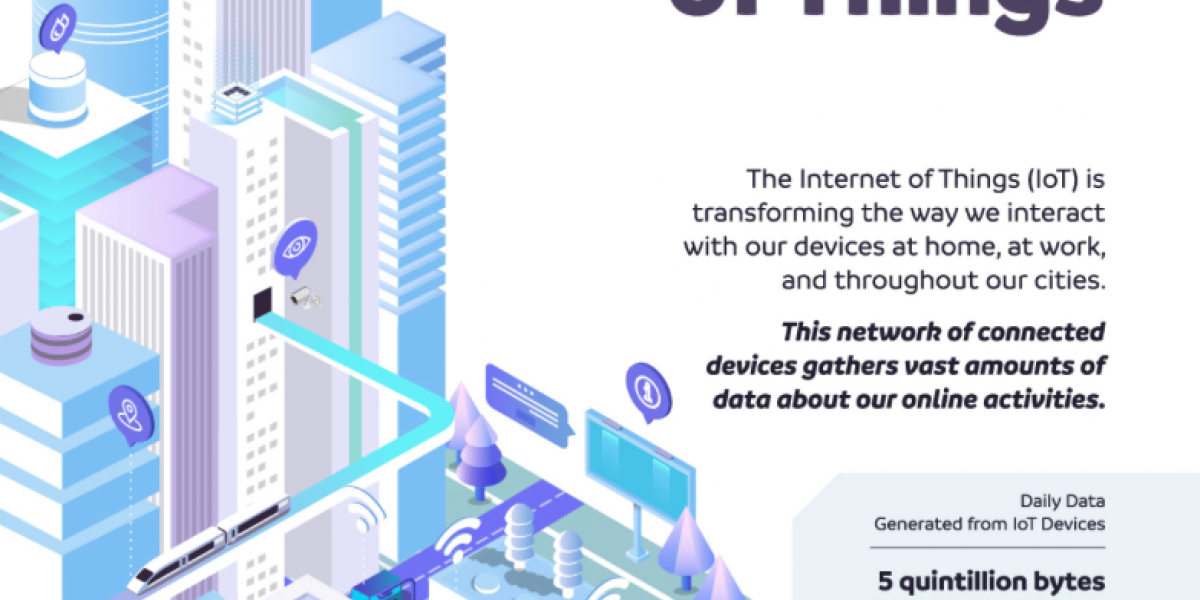 The Internet of Things (IoT) is a technology helping us to reimagine daily life, but artificial intelligence (AI) is the real driving force behind the IoT’s full potential.

From its most basic applications of tracking our fitness levels, to its wide-reaching potential across industries and urban planning, the growing partnership between AI and the IoT means that a smarter future could occur sooner than we think.

This infographic by TSMC highlights the breakthrough technologies and trends making that shift possible, and how we’re continuing to push the boundaries.

IoT devices use the internet to communicate, collect, and exchange information about our online activities. Every day, they generate 1 billion GB of data.

By 2025, there’s projected to be 42 billion IoT-connected devices globally. It’s only natural that as these device numbers grow, the swaths of data will too. That’s where AI steps in—lending its learning capabilities to the connectivity of the IoT.

The IoT is empowered by three key emerging technologies:

Together, these interconnected devices are transforming the way we interact with our devices at home and at work, creating the AIoT (“Artificial Intelligence of Things”) in the process.

So where are AI and the IoT headed together?

There are four major segments in which the AIoT is making an impact: wearables, smart home, smart city, and smart industry:

Wearable devices such as smartwatches continuously monitor and track user preferences and habits. Not only has this led to impactful applications in the healthtech sector, it also works well for sports and fitness. According to leading tech research firm Gartner, the global wearable device market is estimated to see more than $87 billion in revenue by 2023.

Houses that respond to your every request are no longer restricted to science fiction. Smart homes are able to leverage appliances, lighting, electronic devices and more, learning a homeowner’s habits and developing automated “support.”

This seamless access also brings about additional perks of improved energy efficiency. As a result, the smart home market could see a compound annual growth rate (CAGR) of 25% between 2020-2025, to reach $246 billion.

The practical applications of AI in traffic control are already becoming clear. In New Delhi, home to some of the world’s most traffic-congested roads, an Intelligent Transport Management System (ITMS) is in use to make ‘real time dynamic decisions on traffic flows’.

Last but not least, industries from manufacturing to mining rely on digital transformation to become more efficient and reduce human error.

From real-time data analytics to supply-chain sensors, smart devices help prevent costly errors in industry. In fact, Gartner also estimates that over 80%of enterprise IoT projects will incorporate AI by 2022.

The Untapped Potential of AI & IoT

AIoT innovation is only accelerating, and promises to lead us into a more connected future.

The AIoT fusion is increasingly becoming more mainstream, as it continues to push the boundaries of data processing and intelligent learning for years to come.

Just like any company that blissfully ignored the Internet at the turn of the century, the ones that dismiss the Internet of Things risk getting left behind.

A lot can happen in an internet minute. This graphic looks at the enormous numbers behind the online services billions use every day.

What Happens Every Minute on the Internet in 2020

In 2020, an unfathomable amount of digital activity is occurring at any given moment. This ongoing explosion in activity is the aggregate output of 4.5 billioninternet users today, a number that’s projected to increase even further in coming years.

This powerful visual from Domo helps capture what happens each minute in today’s hyper-connected internet era, and it’s actually the eighth edition produced since the year 2012.

What can we learn from the evolution of what happens in an internet minute?

How Times Have Changed

Over its relatively short history, the internet has been a catalyst for both the rise and demise of new companies and platforms.

By looking at which brands have appeared in the graphic in earlier years, we can roughly chart the prominence of certain tech segments, as well as observe brands with the most staying power.

As you can see above, platforms like Tumblr, Flickr, and Foursquare showed some promise, but eventually got omitted from the graphic as they dropped off in relevance.

Meanwhile, tech companies like Facebook, Amazon, and Google have had impressive staying power, evolving to become some of the biggest companiesin the world. In the process, they’ve caught up to longer-standing titans like Apple and Microsoft at the top of the food chain.

Not surprisingly, much of the internet landscape looks different in 2020. Here are a few of the digital hot spots today.

Cash Transfers
Nearly $240,000 worth of transactions occur on Venmo per minute. This has served as a catalyst for parent company PayPal, which evolved along successfully with fintech trends. PayPal’s stock now trades at near all-time highs.

E-Commerce
Even before COVID-19 resulted in shuttered storefronts and surging online orders, e-commerce was a booming industry. It’s now estimated that $1 million is now spent per minute online. Amazon ships an astounding 6,659 packages every minute to keep up with this demand.

Collaboration Tools
In a predominantly remote-working environment, tools like Zoom and Microsoft Teams host 208,333 and 52,083 users each minute respectively. Particularly in the pandemic era, it seems that this trend is here to stay.

The accelerated world we are in today means that many companies do not sustain a competitive advantage for as long. Social media companies have dwindled as observed above, and this is similarly reflected in the average lifespan of an S&P 500 company.

A typical company’s tenure on the S&P 500 is expected to shrink rapidly in the next few years:

Companies are shaving anywhere between 15-20 years off those highs, with estimates of further declines. This metric symbolizes the rapid evolution of the business landscape.

It’s seemingly easy to forget mankind is still very early in the developments when it comes to the internet. But in this short period, its rise to prominence and the broad digitization of the world has left us with a very eventful timeline.

If the last decade serves as a reference point, one can expect further and intensifying competition among tech companies. After all, the reward—winning in today’s digital economy—reaps much greater value.

All signs point to internet activity advancing to further heights, if not because of 5G and its associated breakthroughs, then perhaps due to the steady rise in people gaining internet access.

Ranked: The Most Popular Websites Since 1993

This animation provides an interesting overview of the websites with the highest traffic over the last few decades, and how the rankings have changed.

The Most Popular Websites Since 1993

The internet has become an increasingly important part of our everyday lives.

While it’s hard to imagine modern life without Google or YouTube, it’s interesting to reflect on how much the web has changed over the last few decades.

This animation by Captain Gizmo provides a historical rundown of the most popular websites since 1993, showing how much the internet has evolved since the early ’90s.

While the web has changed drastically over the years, the top-ranking websites have remained relatively consistent. Here’s a look at the websites with the most traffic since 1993, and when each site held the number one spot:

AOL was one of the first major web portals, back in the era of CD-ROMs and dial-up modems. In its heyday, the company dominated the market, largely due to an aggressive free trial campaign that cost millions (possibly even billions) of dollars to execute.

Despite the large investment, the campaign worked—at its peak, AOL had over 30 million users, and a market cap of over $200 billion. It was the most popular website online until the early 2000s, when broadband started to replace dial-up. As the sands shifted, AOL struggled to stay relevant and was eventually sold to Verizon for just $4.4 billion.

Starting off as a web directory, Yahoo was the first website to offer localized indexes for major cities. At Yahoo’s zenith, it was worth $125 billion, but a series of missed opportunities and failed acquisitions meant that it could not keep up. Like AOL, Yahoo is now also owned by Verizon, but remains a top 10 website globally.

It’s no surprise that Google currently comes in at number one. It started out in the early ’90s as a university research project. Today, it’s become virtually synonymous with the internet, which makes sense, considering 90% of all internet searches are made on Google-owned properties.

Prior to Google’s success, there were several other go-to search engines that paved the way for Google in many ways:

Unlike Infoseek, Lycos and WebCrawler have somehow managed to stick around—both companies still exist today. Of course, they’re nowhere near comparable to Google in terms of revenue or daily search volume.

The Evolution of Social Media

Unless you are a Gen Zer, you probably remember MySpace. Like Lycos and WebCrawler, MySpace technically still exists, although it’s certainly not the high traffic site it used to be.

Created in 2004, MySpace became a hub for musicians and music fans on the web. In just a year, the website saw massive growth, and by 2005, it was acquired by News Corp. MySpace continued to dominate the social media landscape until 2008, when Facebook took over as the internet’s most popular social media platform.

Facebook’s story is well-known at this point. The Zuckerberg-led creation was a social networking site that was exclusive to Harvard students, but it soon opened up to dozens of other universities and then finally the general public in 2006. Just two years later, and the site had 100 million active users, rising to the top of the social media spectrum.

Although Facebook often finds itself mired in controversy today, the site remains the world’s most popular social media platform on the internet with close to 3 billion users.

It’s hard to predict what the future holds for Facebook, or for any of the other websites currently dominating the web.

If anything is clear from the above animation, it’s that the list of the world’s most popular websites is constantly shifting—and only time will tell what the next few decades will bring.